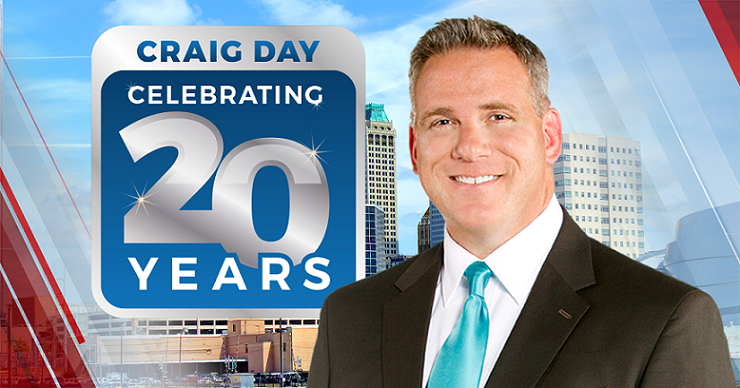 Next week marks a significant career milestone for Oklahoma’s Own Craig Day – 20 years of service to Oklahomans while reporting and anchoring at News On 6.

“As a fifth generation Oklahoman, I’m so grateful to have had the chance to work at News On 6 for the past 20 years, especially for such a great Oklahoma based company,” said Day. “It is such a privilege to share so many stories of Oklahomans over the years, and I look forward to the next 20 years!”

Day joined the News On 6 team on March 1, 2002, and he’s brought award-winning coverage to viewers ever since. You can find him at the anchor desk each weeknight at 5, 6 and 10 p.m. alongside longtime desk partner and co-anchor Lori Fullbright.

“Craig Day represents the best of Oklahoma's values. He's a true gentleman, family man and treats all he meets with kindness and respect,” said Fullbright. “He's a genuine journalist and all around class act and I'm lucky to call him one of my dearest friends!”

A native of Seminole, Day is synonymous with Oklahoma. A down-to-earth, humble, hard-working journalist with a heart of gold, Day has earned the love of his community and the trust of thousands who tune in each weeknight for their local news.

He has a real pride for his home state. From cave camping in Robbers Cave State Park to visiting Pops on historic Route 66 in Arcadia & Snowman Wonderland in Seminole to sharing the USS Tulsa commissioning ceremony from San Francisco and following the journey of a herd of bison from the Badlands to the Cherokee Nation in Oklahoma, Day’s stories make us proud to be Oklahoma’s Own.

Day also loves sharing the stories of fellow Okies. He’s introduced viewers to countless Oklahomans over the years, including a Dewey couple that celebrated the holiday season with a home full of Christmas trees (115 to be exact!), Owasso native & former Pittsburgh Steeler Jon Kolb, a group of Oklahomans competing in extreme endurance racing and legendary singer & musician Roy Clark.

“Craig Day is truly one of Oklahoma’s Own, born and raised here with Oklahoma values and standards,” said Chuck Maulden, News On 6 Director of Content. “Craig knows Oklahoma like the back of his hand. During his long career, Craig has traversed every nook and cranny searching for the stories of Oklahoma people and telling them in a way only a native Oklahoman can. Craig’s Oklahoma roots run deep and so does his devotion to solid journalism.”

Day is a distinguished alumni award winner in the Mass Communications department of East Central University in Ada. Before joining the News On 6 team, he worked for television stations in Shreveport, Louisiana and Sherman, Texas. Throughout his career, Day has covered historic events from across the nation, including Hurricanes Katrina, Ida & Harvey, the space shuttle Columbia disaster and the Joplin tornado. He’s also been here to cover the moments that have had a lasting impact on Oklahomans, including the I-40 bridge collapse near Webbers Falls, historic flooding in 2019 and tornados in Moore & a number of other communities in Oklahoma.

Day's reporting has been honored by the Oklahoma Association of Broadcasters, Oklahoma Associated Press, the Oklahoma chapter of the Society of Professional Journalists as well as organizations in Louisiana, Texas and Arkansas. While at News On 6, Day has been nominated for four Emmy awards. He has also been recognized with multiple Redbud Awards from the Oklahoma Travel Industry Association for helping to promote the state of Oklahoma.

Over the years, Day has visited numerous elementary schools across Green Country, bringing books to life for hundreds of students. He also volunteers as a narrator for the Oklahoma Library for the Blind where he voices the magazines "Cowboys and Indians" and "Oklahoma Today."

Day is married with four children. He enjoys spending time with his family, reading, golf and trying to find the best barbecue restaurants around!